Our vantage point is a little different this post.

Why you ask? The Salt Project and Utah.com teamed up on an adventure to Golden Spike National Monument.

It was kind of weird but only for a second. Bri and Ann (from Utah.com) followed The Salt Project around and took photos of us, ALL of us. This doesn't usually if ever happen. If it does, it's usually one or two shots. Usually, we're all carrying around a few different cameras trying to capture moments. It was actually kind of hard to let someone else take all the photos, but after a few minutes, we got the hang of it.

First of all, it's a good thing I bought a National Parks Year Pass last year. I've had to use it in so many unexpected places. For instance, I didn't know Golden Spike was a National Monument, thus requiring a fee. Since I had my pass, I didn't have to pay a fee.

Also, if you remember, all fourth graders get a free summer pass for all the National Parks through Every Kid in a Park. Even if you homeschool, you can still get a pass for your fourth grader.

I'm kind of one of those annoying people that likes to get all the flyers/newspapers/maps and read about everything. After checking in at the front desk and asking all my questions and getting all my answers we were ready to go.

Or so I thought. We were suddenly drawn in to the Jr. Ranger Program!

I've always heard about these, but never participated, mainly because my kids can't even color in the lines yet. But it's not just for kids. Parents, Grandparents and adults can participate to receive their Jr. Ranger Golden Spike Badge!

Since I already have a travel book with all the stamps of National/State places we visit, I decided becoming a Jr. Ranger was something we needed to do. You can get a National Parks Passport book here.

After getting our booklets (they have a one for older kids and younger kids too) we decided to find some shade and get cracking on our booklets.

Luckily, these books really are for everyone. From the mamas to the babies, we all had something to do in these books.

Seriously, some of these questions in the books made ya think.

Or you had to explore and find the answers throughout the park.

Sometimes, you just have to multi-task. Getting your hair done while doing school work.

We probably spent a good 20 minutes on our books. Then, Aiko heard the train whistle.

This kid was SOOO excited to see the trains. It was kind of comical.

We rounded up the kids and headed on out to the train tracks. This took another 10 minutes, even though we were just a 2 minute walk from the tracks. I guess that happens when you have 9 kids.

How many of you have actually been to Golden Spike? None of us had, well Bri & Ann have, but the rest of us hung our heads in shame.

How many of you know the story behind Golden Spike? The Golden Spike is real first of all. Real GOLD. It's also the ceremonial final spike that joined the rails of the First Transcontinental Railroad across the United States.

This spike connected Central Pacific and Union Pacific Railroads on May 10, 1869, at Promontory Summit, Utah Territory. There are giant murals inside of Union Station, showing this monumental moment of history. You guys, this is a BIG deal in USA history, not just Utah history.

So what's out at this National Monument?

If you saw our Facebook Live post, you probably saw our kids running around and a beautiful steam engine train. That's right, you can watch a real Steam Engine Train.

While we were waiting, we decided to take a few photos of our new Salt Project shirts that are now for sale here!

You can watch the train come right in front of you. A safe distance, but I was actually very surprised at how close they have everyone. The kids were beside themselves with excitement! Trains are usually something they get to watch from far away.

This Steam Engine train is a replica of the 119 Union Pacific train. It's beautiful.

The train was constantly blowing it's whistle. There was one whistle that scared everyone (even though we were warned right before.) It was SUPER loud!

All the little toddlers cried for half a second, then got soooo excited that the train was coming by. If you kids have tender ears, make sure to bring some earmuffs or just cover their ears with your hands.

I always get a little emotional watching trains. (I was trying to hide my tears and keep my ugly sad face covered.) My grandpa was a big train man. He even ran a small model train shop in Iowa. He could tell you the schedule of any train in the Mid-West. He knew it all. He used to chase trains in a big blue suburban with his old film camera. He passed a few years ago and now watching any train makes me teary-eyed.

Then we watched the 119 U.P. Steam engine train back up.

While waiting for the train to make another appearance, we sat down in the bleacher area and listened to the Ranger tell some history.

The ranger explained that this train is so colorful because back in the day when everyone rode trains, you wanted to have prettiest train around!

I guess it's not too different from today. Everyone wants a fancy car right?

It really was sooo fancy looking. Everything sparkled and shone.

You could tell the the train engineers were super proud of their train.

They even dressed up the part!

This guy even had soot smudged all over his face.

Here was one of the rare times Stephanie pulled out a camera...but it was just her Polaroid! One shot only! She actually got me into the habit of carrying a Polaroid. I decided my children needed to be able to hold photographs.

It's actually a super fun tradition and the kids love carrying around a tiny picture of themselves. We get our Fujifilm Instax Mini cameras and film from Amazon.

This couple was hilarious and not from the states. I think it's cool to hear about people traveling from all over the world to come and visit our state.

There are some stairs so you can get a close up look at the 119. You can't go inside but you can get pretty close. Also, don't touch the train, because it's steam, it really is HOT!

I kind of wish I had a black and white of this photo. I feel like we are couple documenting that epic day in US history.

Can you even imagine what it would be like to have only one way of fast transportation back in the day? You could ride a horse or the train people. It wasn't that long ago either.

Seriously, the details on this train are unreal.

These cute guys and their costumes.

After getting our fill on this lovely train, we decided it was lunch time. Before heading out to Promontory Point, we picked up some sandwiches and Izze soda pop from The Bickering Sisters in Ogden.

I'd heard a lot about their sand which shop and I'm glad we teamed up with them.

Their grub was soooo yummy. (This is actually a good reminder for me to try their breakfast menu sometime.)

The bread and all the ingredients were spot on. It was quite heavenly.

The kids all had peanut butter and honey sandwiches. While the adults tried the Chicken Salad Sandwich, The Grilled Turkey, Apple & Cheddar and the Peppered Eggplant and Hummus sandwich.

Mmmmm, I need to go back.

While everyone was happily munching on their sandwiches, Locke started working on his Junior Ranger Booklet.

These booklets are actually kind of intense. It took us a good 45 minutes to fill out the books. We also had to ask for help at the front desk, but it made it all the more fun.

The Rangers makes sure that you aren't cheating, they go through every page and check each question.

This was kind of a super proud moment. We all decided to finish a booklet so we could get our own Jr. Ranger badge for Golden Spike.

Mamas and babies all getting sworn in.

Everyone was pretty proud of themselves. Including the mamas. 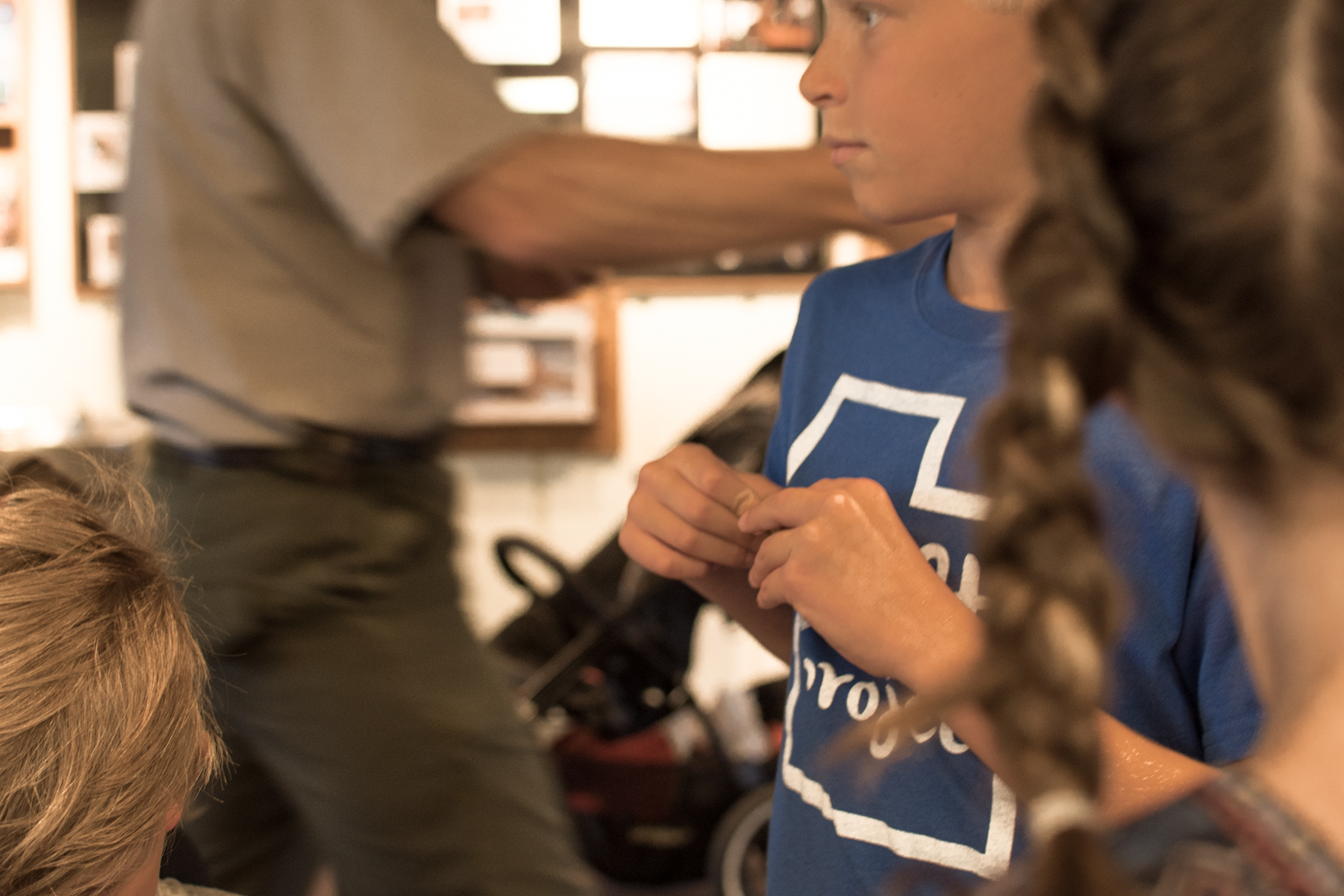 Now, I know many of you are thinking, that's a long way just to visit a train. But honestly, it was pretty cool. Even in the heat. No pun intended. Watching our kids get super excited about the train made it all worth it.

Plus, we were able to visit one more Bucketlist places, The Spiral Jetty! Utah.com will be sharing some more photos of The Salt Project adventuring at The Spiral Jetty. If you are driving to Golden Spike National Monument, you might as well drive 40 minutes to one of the coolest art pieces in The Great Salt Lake.